Lately PERSPECTIVE Alkmaar worked on a masterplan for the Wilhelmina Hospital in Assen, NL. This middlesized (35,000 m²) Dutch Hospital is being exposed to a rapidly changing health environment. The hospital facility has not been changed very much since it was built in the 90’s. Perspective Alkmaar has been asked to support the hospital in finding its new direction for the future and to show them the consequences in for the hospital building. Being convinced of the fact that there is not just one conceivable future Perspective Alkmaar developed a definition and a masterplan for the hospital in 4 scenarios. The scenarios were worked out into functional schemes, investment costs and phasing schedules. Where the first scenario showed the situation when just demanded quality changes would be made (less investments cost) the other 3 scenarios focussed on an optimal functional scheme, on time priorities and the last on an optimal mix of all. Based on those differences the management has chosen to work out 2 of the 4 scenarios to be compared more closely (including impact on exploitation cost). The whole scenario study gives a good insight in the advantages of the investments and confidence in dealing with the risks of the unknown future. 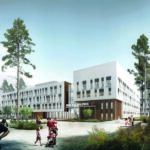